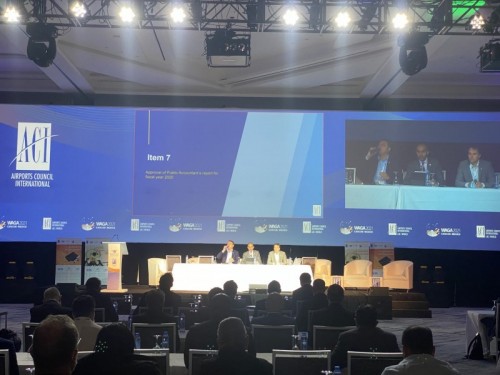 In a new Omani achievement added to the leadership of Oman's civil aviation sector in the region and in recognition of Oman's position in the international map, the General Assembly of the Airports Council International , as the official umbrella of the world's airports at its 64th annual meeting, which was held from November 21 to 24 in Cancun, Mexico, voted to select Sheikh Aimen Ahmed Sultan Al Hosni, CEO of Oman Airports, as President of the Airports Council International in its new round which will start on January 2022 till the end of 2024, succeeding the former President of the Council, Martin Urenician, CEO of Corporation America Airports, in culmination of his continued contributions across the boards of directors of the Airports Council International in Asia and Pacific Ocean while he was the vice-president of the Board since 2018, in addition to his valuable achievements in developing the performance of the seven airports, operated by Oman Airports, in Oman at the administrative, operational and financial level, which contributed to highlighting the great potentials of Oman Airports and the tremendous development of Sultanate of Oman aviation sector before, during or after overcoming the direct effects of the COVID-19 pandemic.

This specialized global consensus confirms that the Presidency of Al Hosni of the Airports Council International comes as a new global certificate in addition to the prestigious international position reached by the Sultanate by strengthening its competencies in various sectors. It is a great chance to strengthen the bridges of the international cooperation and close relations in supporting the progress of the aviation sector at the regional and global level, thus proving Oman's airports to prove its prominent regional and global role in the civil aviation sector, based on its international prestige, seeking to establish its distinguished position on the international map.

In a statement to Sheikh Aimen Ahmed Al Hosni on his election to this prestigious international position in the world's airport sector, he said: I am pleased and honored to begin my statement on this position- which coincides with my assignment and our dear country Oman celebrates the 51st National Day - to raise the highest congratulations and blessings for His Majesty Sultan Haitham bin Tariq and all of Oman on this blessed occasion, Asking Allah to perpetuate the joys of Oman as it revels under his wise rule with success and prosperity.

It is an honor and a responsibility to represent the Council and the aviation sector on behalf of the Sultanate of Oman with all the aspirations and hopes that this stage brings. This responsibility comes as an extension of the role of the Sultanate of Oman in supporting the Council through its active membership in the past years. Today, I look forward to working with members of the Council in promoting cooperation between airports, international aviation organizations, and our various partners in finding innovative ways to enhance efficiency in the airports and aviation sector.

Al Hosni added: I am also pleased to confirm that the great confidence that our wise government, represented by the Omani Investment Authority, has placed in us is to move on the continuous endeavor to enhance what we have achieved in the period before the presence of Oman’s airports in the Airports Council International; and to continue consolidating the Sultanate’s position and great role in the civil aviation sector regionally and globally. We achieved it for Oman in this prominent international forum. Moreover, I do not want to miss expressing my sincere appreciation to the General Assembly and the members of the Board of Directors for their generous trust and to all the strategic partners of Oman Airports for their role in facilitating our work tasks and our continuous support and to all employees of Oman Airports for their great efforts to reach this global professional level, praise be to Allah.

On the other hand, Luis Philippe de Oliveira, the General International Director of the Airports Council International ACI, said: I would like to welcome Sheikh Aimen Ahmed Al Hosni, President and Candice McGraw as Vice President of the new round of the Council, these are two prominent and successful figures in the airport world and we are fortunate to choose them and no doubt the Council and the airport community will benefit greatly from their valuable experience and acumen as we emerge from the repercussions of the global epidemic.

In this regard, the World Council confirmed in its statement that the selection of Sheikh Aimen Ahmed Sultan Al Hosni, CEO of Oman Airports as President of the Airports Council International, was an extension of Oman's distinguished role in supporting the council's progress through its membership and the belief of the Board of Directors in what Al-Housani will contribute and present enriching the presidency of the Board. He also stressed the importance of Oman's strategic position on the global airport network map, and therefore the vital roles that Oman is expected to play towards supporting the development of this sector at the regional and global levels.

The Airports Council International was established in 1991 to perform supervisory and coordinating functions in aspects of security, energy, safety, technology, and the environment for this vital economic sector in the world, as it is also the Council's responsibility to represent the interests of airports to international and national policymakers. The Council is headquartered in Montreal, Canada, while its regional councils are based in Asia and the Pacific, North, and South America, Africa, and Europe. The Board aims to promote airports and promote professional excellence in airport management and operation as well as, by strengthening cooperation between airports, international aviation organizations, and business partners seeking to provide safe and highly efficient air transport systems. The council has 701 members and operates more than 1933 airports in 183 countries around the world.