Airports Council International is considering enhancing the efficiency of airports and supporting sustainability projects in Muscat. 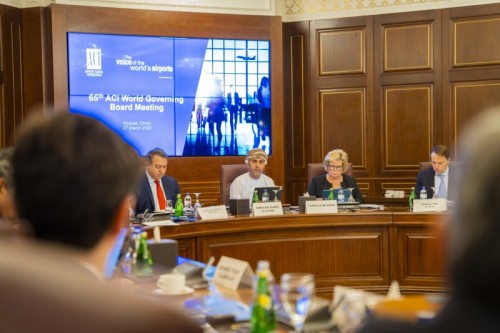 Yesterday, Sunday the meetings of Airports Council International Board of Directors were concluded in the Sultanate of Oman, chaired by Sheikh Aimen bin Ahmed Al Hosni, CEO of Oman Airports and the chairman of the Airports Council International World Governing Board, where the board discussed and approved the action plan for the next two years and ways to enhance cooperation between airports, international aviation organizations and various strategic partners. The meetings aim to bring innovative ways to enhance efficiency in the airports and aviation sector, environmental and economic sustainability projects and other challenges that directly and globally affect the airports and civil aviation sector.

Sheikh Aimen Al Hosni stated after the meeting "The participants have considered the gradual return of flights after the Covid-19 pandemic, which indicates the return of the aviation traffic at global airports with the rise in passenger numbers in the last months since the beginning of this year 2022. This assures the return of stability to the sector and its people. Several recommendations have also been reached that promote the strength of the Council as a global organization representing more than 1,950 airports in various countries around the world.”

Luis Felipe, Director General of the Airports Council International, stated “Our meetings in the Omani capital, Muscat, examined the return of recovery in air traffic around the world, with the lifting of restrictions and the increase in the global desire for travel, noting that the participants discussed setting future plans to meet the challenges facing the sector; specifically, on how to work together to confront climate change, and emphasizing everybody's keenness to open markets and support the transformation of the aviation sector to be environmentally friendly.

The Airports Council International concluded its agenda on March 27, in Muscat, and approved a set of recommendations as follows:

⁃ Adopting amendments to laws regarding security, safety and environmental sustainability.

⁃ Adopting new AI Center (iHub) Intelligence for all airports in the world, in order to provide the necessary data and analysis for airports to be more capable of planning for future projects at the executive level.

⁃ Adopting a joint virtual training center under the umbrella of the Airports Council International to exchange experiences between workers in the sector.

⁃ Adopting a unified action plan, in which the procedures are consistent, to face any new health challenges that may arise in the sector, in cooperation with the efforts of all the parties operating within.

⁃ Emphasizing a greater use of modern technology in the airports sector and enabling it to be a joint coordination tool among the members of the Council in the future.

The Council also stated that it is in the process of conducting a comprehensive review of fees and measures that could be taken by airports to ensure their ability to operate as independent entities, prior to the meeting of the International Civil Aviation Organization (ICAO) to be held next September, as adopting such resolution may lead to changes in the regulatory framework established by the ICAO.

It is worth noting that the Sultanate of Oman, represented by Oman Airports, is chairing the current term of the Airports Council International Governing Board, a period extending to the end of 2023.

Airports Council International is considering enhancing the efficiency of airports and supporting sustainability projects in Muscat.

The Accreditation of Oman Airports Training Centre as a vocational Training Institute
Chaired by Aimen Al Hosni, and attended by leading airport CEOs from around the world The Airports Council International (ACI) World Governing Board meets, in the Sultanate of Oman
"Oman Airports" signs a Memorandum of Understanding To supply green waste to the fertilizer factory "Kala"
The Sultanate of Oman will host the first meeting of the new Board of Directors of the Airports Council International, on March 26.
Muscat International Airport and Salalah Airport obtained the airport health accreditation from Airports Council International (ACI)
On the basis of one flight per week. Suhar Airport welcomes Low-cost Taban Airlines
Some modules are disabled because cookies are declined. Accept cookies to experience the full functionality of this page.
ACCEPT COOKIES
We use cookies to optimize the website, no personal information is stored. Learn more
DECLINE COOKIES ACCEPT COOKIES