This makes Duqm Airport one of the most active contributors in the aviation and airports sector with regards to reducing carbon emissions by adopting the best international standards for environmental conservation through the latest internationally approved programs.

These efforts are in line with Oman’s national strategy to achieve zero neutrality by 2050. This is being implemented by all the relevant authorities in the Sultanate of Oman to achieve a balance between the requirements of sustainable development and the sustainable use of natural resources for the growth of the national economy and to reduce the effects of climate change through established procedures. These are considered key components of the strategies linked to the realization of the Oman Vision 2040.

Mohammed bin Humaid Al Shuaili, Vice President of Regional Airports in Oman, said: “We work at Oman Airports alongside all our partners in the aviation sector, to achieve the national aim to build an integrated system to contribute to the Sultanate of Oman’s achievement of zero carbon neutrality by 2050, as directed by His Majesty Sultan Haitham bin Tariq – may Allah Protect Him. We are achieving this by incorporating professional practices to achieve a balance of sustainable development and the reduction of the repercussions of climate change. In addition, we are working to build the knowledge economy, utilizing clean technology to achieve sustainable development, and creating a diverse mix of energy sources.”

Al Shuaili added, “I congratulate the Duqm Airport team and the other relevant teams in Oman Airports and our strategic partners for renewing the International CAC for the second year in a row. Work will begin to raise the level of Duqm Airport in this important global program by adopting many green initiatives and programs, and by adhering to the standards contained in CAC to reach higher levels, which is a permanent commitment towards developing a sustainable future in the field of aviation and airports and effectively managing their operations and reducing negative effects on the environment.”

Airports Council International (ACI) for Europe has expanded its 2009 airport carbon emission management accreditation program in Europe to the Asia-Pacific region. This step enabled several airports in these areas to participate in the implementation of this program and to obtain accreditation within one of its four levels.

ACI provides tools to enable airports to manage and reduce carbon emissions. The tremendous development of airports within their facilities, as well as processes and procedures, includes an environmentally sustainable and effective strategy, which includes the expansion of the Euro-Asia-Pacific Airport Carbon Emission Management Accreditation Program.

Duqm Airport was able to quickly integrate with other modern components of Duqm Special Economic Zone system, as one of the important pillars of the region to complete the government’s comprehensive vision of making Duqm one of the pillars of economic and tourism development in Al Wusta Governorate, and to keep pace with the current and future economic diversification plans that Duqm Special Economic Zone provides to citizens and investors. The airport has provided a strong boost to investors and workers in the process of travel and access to Duqm Special Economic Zone. It has also contributed to the rapid logistics airlift between Muscat and Al Wusta Governorate, which has boosted economic and tourist activity to Duqm, the city of the future on which the government has bright hopes for the next stage.

It is worth noting that Oman Air operates daily flights to Duqm except on Friday, while SalamAir announced that it will operate flights to Duqm airport as of 29 October 2022. 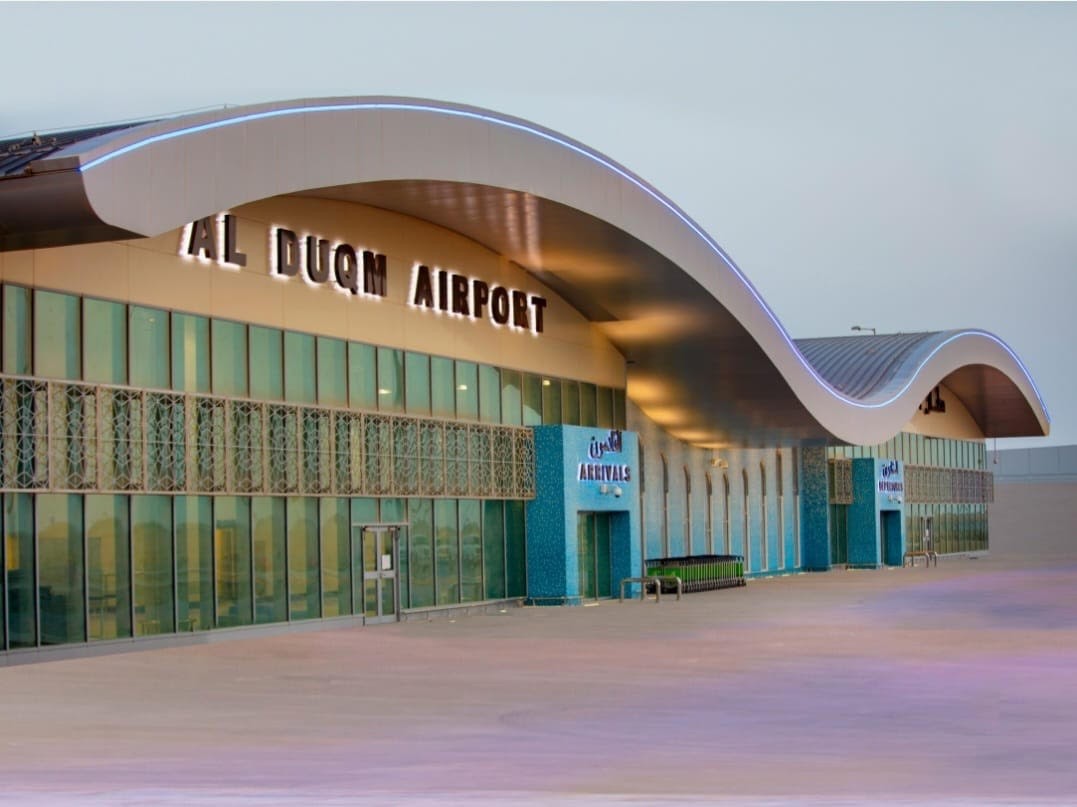 Muscat International Airport receives the first flight of Indian Air Vistara.
During its 43rd Meeting at Muscat Airport Council International (ACI) Asia -Pacific elects 3 new board members
The Sultanate of Oman hosts the meetings of the Board of Directors of the Airports Council International for Asia and the Pacific
The Sultanate Of Oman Wins 9 out of 69 Major International Awards At The Closing Ceremony Of The World Travel Awards 2022
Oman Airports opens Documents Management Center at Muscat International Airport
Sultanate of Oman to host world travel awards grand final gala ceremony 2022
Some modules are disabled because cookies are declined. Accept cookies to experience the full functionality of this page. Learn more
ACCEPT COOKIES
We use cookies to optimize the website, no personal information is stored. Learn more
DECLINE COOKIES ACCEPT COOKIES