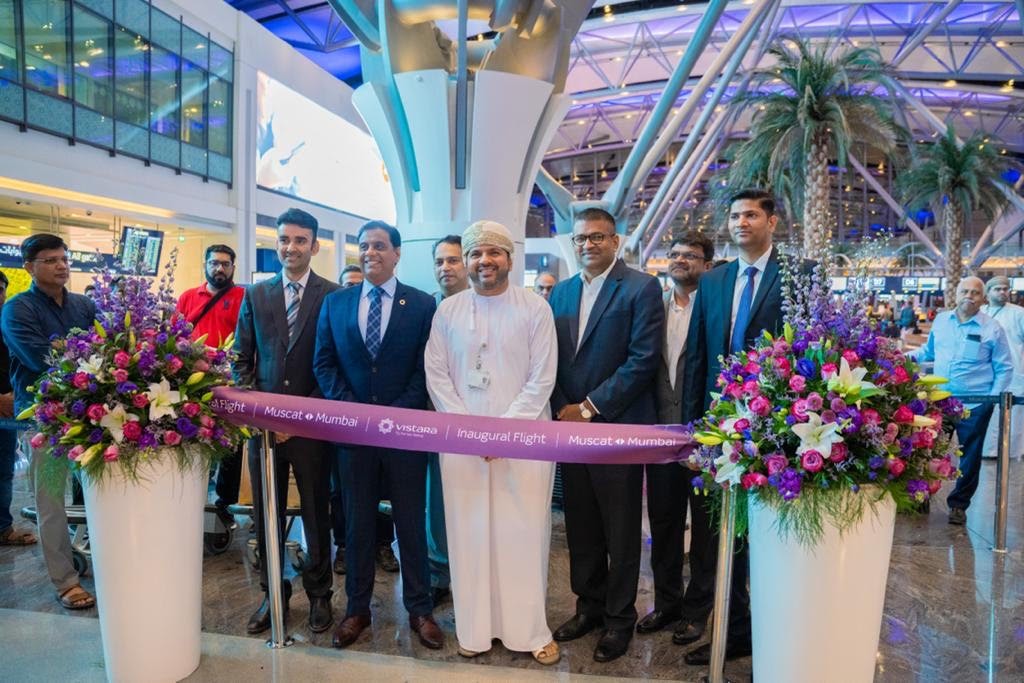 Muscat Intel Airport, one of the most growing airport in the region,  received on Monday 12 December 2022 the first flight of Indian Air Vistara, launching the a direct route between Mumbai International Airport and Muscat on a daily flight.The inaugural flight has landed to Muscat Intl Airport at 09:35 PM which was received with water sprays in as a gesture of its safe arrival to the land of the Sultanate of Oman.

In the welcoming of this flight, there was Sheikh. Samer Ahmed Al-Nabhani, the CCO of Oman Airports, who expressed his pleasure for launching this route between Muscat and Mumbai in the light of the growing economic and tourism relationships between the Sultanate of Oman and the friendly republic of India.

Al-Nabhani mentioned to the importance of this Asian route which comes in the context of increasing passengers of Indian nationality to the Sultanate of Oman, a prime tourism destination in the region for its historical and civilizational richness, natural attractions and diverse landscapes besides its modern shopping centers and luxurious auditoriums to host India wedding tourism. At Oman Airports, we are working to attract more airlines to operate their direct flights either to Muscat Intel Airport to other Oman’s airports to provide seamless direct flights for the passengers looking to discover the Oman’s history and unique treasures that are overarched with its security and stability and spreading the peace message among the world peoples.

Mr. Vinod Kannan, CEO of Vistara, said that we are pleased to launch this route between Muscat and Mumbai as we are keen to enhance our presence in the Sultanate of Oman to be within our gowning international network. This will make business, trades and tourism constantly flourishing between the two countries. We are confident that the passengers will appreciate choosing to travel between Muscat and India through the best airline in the southern Asia on this route.Tourism and economic sector between the Sultanate of Oman and the Republic of India sees a rapid growing besides the social strong bonds with India and existence of big Indian community. All these will play a role in the success of operating various routes between the two countries to give passengers better travel options.

Worth noting that Indian Air Vistara is an Indian full-service airline, with its hub at Indira Gandhi International Airport. It commenced operations in 2015 with its inaugural flight between Delhi and Mumbai. The carrier is a joint venture between Tata Sons and Singapore Airlines.

Vistara is India’s highest-rated airline on Skytrax and TripAdvisor, and it has been the winner of several “Best Airline” awards, besides being lauded for world-class cabin cleanliness and upholding high safety standards. In a short span of seven years since its establishment, Vistara has raised the bar for operations and service standards in the Indian aviation industry to become one of the most loved airlines in the country and has recently crossed the milestone of flying 35 million passengers.

During its 43rd Meeting at Muscat Airport Council International (ACI) Asia -Pacific elects 3 new board members
The Sultanate of Oman hosts the meetings of the Board of Directors of the Airports Council International for Asia and the Pacific
Airports Council International Renews Duqm Airport Carbon Accreditation Certificate for the Second Year in a Row
The Sultanate Of Oman Wins 9 out of 69 Major International Awards At The Closing Ceremony Of The World Travel Awards 2022
Oman Airports opens Documents Management Center at Muscat International Airport
Sultanate of Oman to host world travel awards grand final gala ceremony 2022
Some modules are disabled because cookies are declined. Accept cookies to experience the full functionality of this page. Learn more
ACCEPT COOKIES
We use cookies to optimize the website, no personal information is stored. Learn more
DECLINE COOKIES ACCEPT COOKIES