Three years after its official opening Duqm Airport sets a traffic record of 4,500 flights and over 70,000 passengers since 2019

Since its opening on January 14, 2019, Duqm Airport has been contributing towards boosting Al Wusta’s economic, commercial and tourism activity as one of the Sultanate’s four airports to offer flight operating services in Oman.

Oman Airports recently celebrated the 3rd anniversary of Duqm Airport’s opening, which was considered as one of the achievements of the Blessed Renaissance aimed at building and expanding Oman's airport system, in addition to contributing towards further development of the Special Economic Zone in Duqm (SEZAD) and Al Wusta Governorate at large. Duqm Airport also counts as an important pillar of Oman's Vision 2040.

Duqm Airport accommodates nearly half a million travelers, with future expansion plans to expand its absorptive capacity to 2 million travelers per year, with a total area sprawling across over 273,000 square meters of land. The airport encompasses a passenger terminal, a 37-meter-high air control tower, an air cargo terminal, a 4km runway and a 4-aircraft parking, including the Airbus A380.

The airport seeks to keep pace with commercial and economic activity in the Economic Zone of Duqm, supporting Duqm Port to stimulate logistic transportation within the region.

Ahmed bin Mohammed Al Farsi, Duqm Airport Manager, pointed out that the airport has achieved the government's plans to become one of the main pillars that support Duqm’s economic and tourism development, besides keeping pace with economic diversification plans with the establishment of the Special Economic Zone in Duqm.

Al Farsi stressed that the presence of Duqm airport made it easy for investors and workforces to move and reach the Special Economic Zone for Duqm (SEZAD), one of the largest special economic zones in the Middle East. He further noted that due to its logistic location, Duqm Airport facilitated logistical air traffic by air between Muscat and Al Wusta Governorate, which eventually boosted economic and tourism traffic to Duqm – Oman’s future with huge investment potential in the near future.

“Duqm Airport has contributed significantly to the upsurge in tourism activity with daily flights to Duqm – except Friday, in addition to housing world-class tourism facilities that encouraged many tourists from inside and outside the Sultanate to visit Duqm and enjoy this beautiful city throughout the year. Since its inception and towards the end of 2020, the airport received about 4,500 flights and nearly 70,000 passengers during the same period,” he added.

Strategically located in the Special Economic Zone for Duqm (SEZAD), Duqm Airport is located 14km from Duqm and is easily reachable from south of the Duqm via Sultan Qaboos Road left from the Airport roundabout.

A cornerstone of the economic diversification plans in the Sultanate since 2016, the airport plays a major role in supporting the projects of Special Economic Zone in Duqm (SEZAD) and Al Wusta Governorate at large.

The airport, which is in line with the latest international engineering standards, has been equipped with modern systems in the fields of communications, information technology, security surveillance systems and navigation and meteorological devices, which helped the airport deal with flights both from the Sultanate and international flights from abroad.

The cargo terminal, which could be increased in future, gives additional impetus to the logistic transportation within the region along with the port of Duqm, offering lots of competitive advantages as a logistics and maritime hub for both regional and international investors.

Through Duqm Airport, the Sultanate aims to place the Special Economic Zone for Duqm (SEZAD) on the world map as a significant economic and tourism hub in the Middle East thanks to its exceptional strategic location. 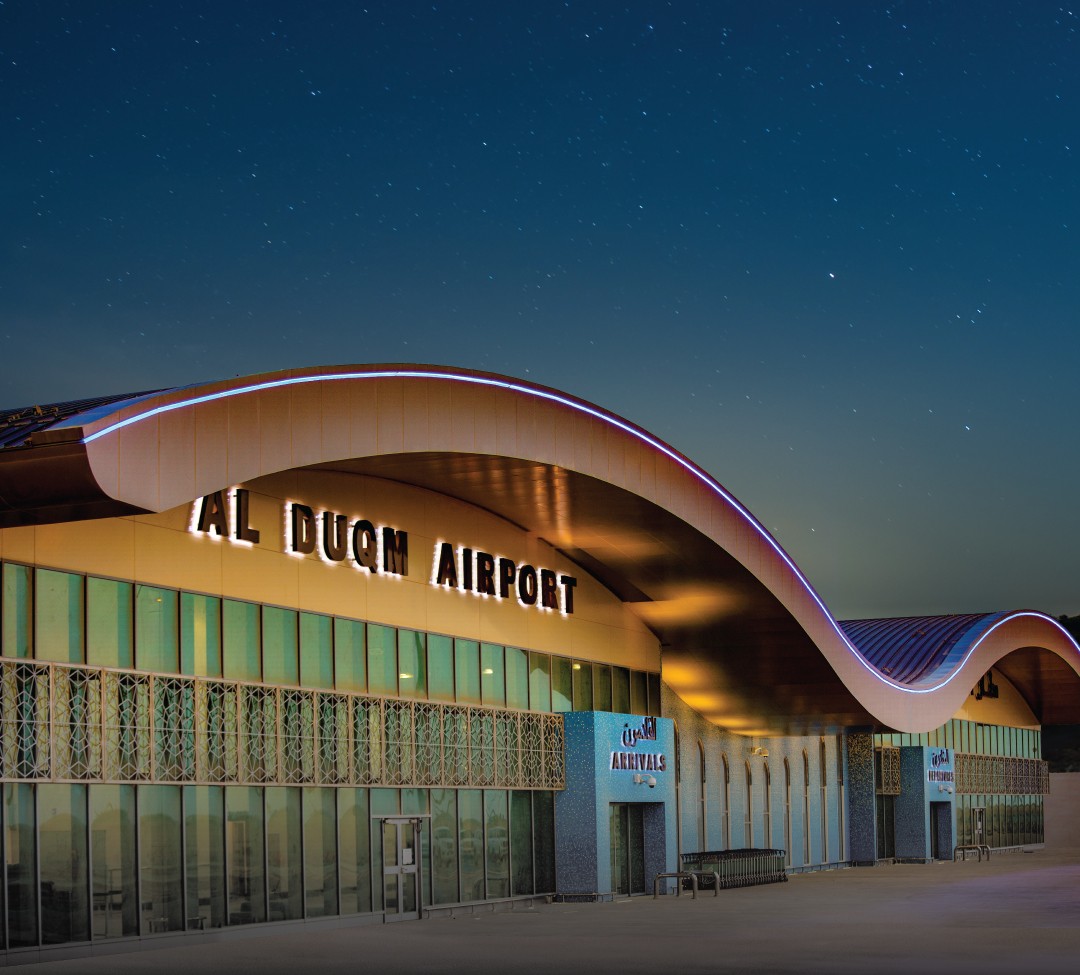 Three years after its official opening Duqm Airport sets a traffic record of 4,500 flights and over 70,000 passengers since 2019